Flavours of the Week

Each week we select two or three Mt Baker Vapor flavours to highlight and offer a special sale on. We also take the opportunity to look into the history of the flavours and give some insight into their flavour profiles. This week’s flavours of the week are Beast Treats and French Vanilla.

Our Beast Treats flavour tastes just like Skittles candy. But the story behind the name of Beast Treats goes a bit further. How can a flavour have a history about it? Well, when you are as old of a vape company as we are, everything has a history behind it! The history of Beast Treats is rooted in where the company started. Mt Baker Vapor was founded in Washington State in 2011. Being that we were all good Washingtonians, we were also all Seahawks fans. At that time, we had a legendary running back who was known as “Beastmode”. Who was this running back? None other than Marshawn Lynch.

Marshawn Lynch joined the Seahawks midway through the 2010 season and went on to be in 4 pro bowls and helped the Seahawks win Super Bowl XLVIII against the Denver Broncos. When Marshawn Lynch was a young boy, his mother always gave him Skittles every time he performed well at football. He kept this tradition up when he got older, so it was not uncommon to see him on the sideline eating some Skittles when he scored a touchdown. In honor of this, we named our Skittles themed flavour after him-Beast Treats! And now you know the rest of the story.

When the company first started, the vape industry was very young. At that time, customers were far more concerned with having flavour names that reflected the actual flavour. This is why many of our early flavour names are simple and to the point. You know exactly what you are getting when you buy French Vanilla! As the vape industry grew, you started getting fancier and sillier names. We could have gone through and changed some of our older flavour names, but at a certain point it would have just confused customers, so we stuck by the trustworthy name “French Vanilla.”

As you can guess, French Vanilla tastes just like French Vanilla. There is not a lot of mystery to this e-juice’s flavour. As our website states it’s “a delightfully rich and sweet vape with deep, flavorful notes of French style vanilla bean.” Honestly, there is not much more to it then that!

Both of these classic flavours come in a multitude of varieties. Here is the list of different ways that you can enjoy these two great Mt Baker Vapor Flavours:

Each week we like to highlight our different flavours and give you an opportunity to explore the history behind them. This is to show that though we offer more variety than any other major brand out there, we don’t skimp on the quality. Each of our flavours has stood the test of time and has remained popular for a reason. We also like to always point out that at Mt Baker Vapor International, we allow you the ability to totally customize your e-liquid. You can get Beast Treats or French Vanilla in just about any type of blend or nic strength you can think of. Added flavour shots and the ability to add Ice and Sweetener are also available.

Our Mt Baker Vapor customers know that we aren’t happy unless they aren’t happy. If you have any questions, comments or concerns about your vape juice purchase, please feel free to send us over an email at order@mtbakervapor.co.uk. We will respond as soon as possible and do everything we can to help you out. 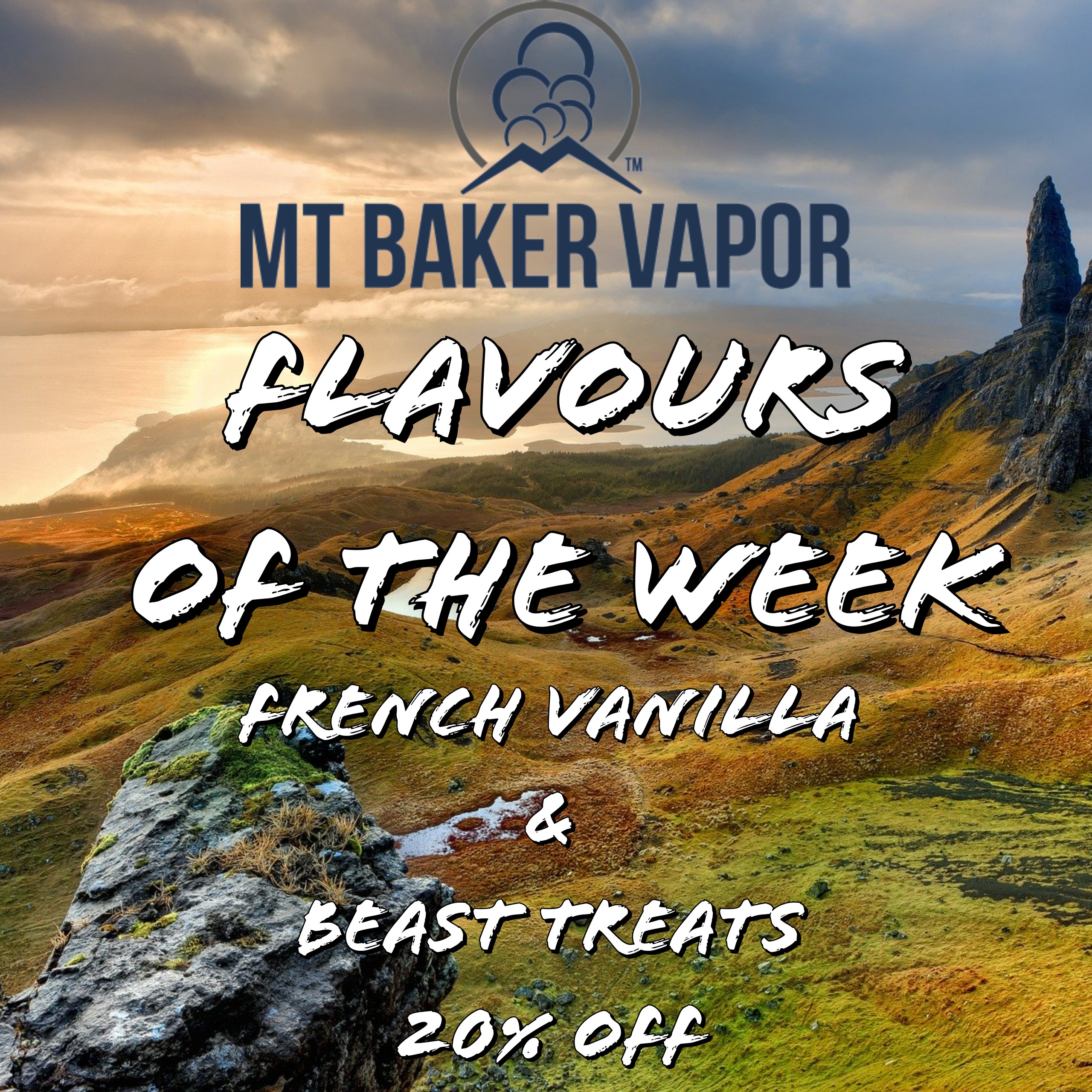 Category: Flavours of the Week